In: Kerk Nuus Church News, Prayer For Today
With: 0 Comments 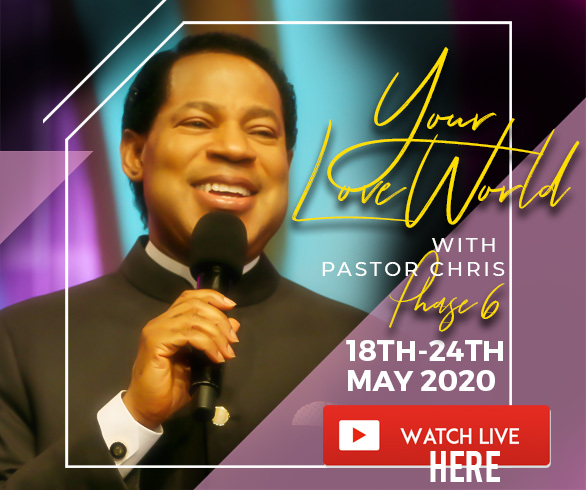 Good News is that Pastor Chris Oyakhilome will lead millions of Christians from right around the world in a world-wide prayer to stop the antichrist’s One World Government takeover. Watch on Youtube.

Pastor Chris Oyakhilome, since the global lockdown began on Friday, March 27, has blessed the Church around the world with revelations from the Bible like the Church has never received before.

It all started with the Global Day of Prayer, led by himself and Pastor Benni Hinn. Their broadcast network had the opportunity to reach 3 billion people! Millions of millions spent the day praying and fasting together.

Since then, he has held daily sessions at Loveworld SAT and opened the Church’s eyes to the reality of what is happening today.

He spent weeks working through the entire book of Revelation and using practical examples in current world events and linked it to what the Bible says will happen in the End Time. Clearly, Jesus’ return to come to rapture His Church is at the door now.

There was fasting and praying every day for 3 weeks against the events worldwide which the antichrist orchestrated to set up his One World Government. The prayers have been very effective so far and everywhere people have begun to rise up against the draconian laws that have been set against the Christian Church in particular.

The climax was with a 3 day dry fast and prayer (Esther fast) and the Lord answered the prayer. Everywhere the WHO’s corona models are now suddenly in question and their models are now being investigated everywhere. The damage to the world economies has however already been done.

However, massive damage has already been done to the economies of the world and the world is on the verge of falling into the One World Economy with the One World money system.

So even more prayer is needed to stop this from happening.

This Sunday 24 May 2020 at 6pm South African time, Pastor Chris will lead the Church again in a prayer session, but this time in a way the Church has not seen before. He said he was going to teach the Church how to generate spiritual electricity like never before and it would be sent against the antichrist government.

Although the antichrist government has not yet been revealed openly, all the signs are already there that structures are being put in place for it. It’s only a matter of time before it manifests. However, the Church’s prayers can still stop it for a while, so that for one last time, the Church may have the opportunity to take the Gospel to the unsaved and to complete the Great Commission of Jesus. If the Church however does not pray, will Jesus come to fetch His Church earlier so that the Church will not suffer the terrible things to come under the antichrist regime.

So be a part of this opportunity, and make a difference in the world where you find yourself.