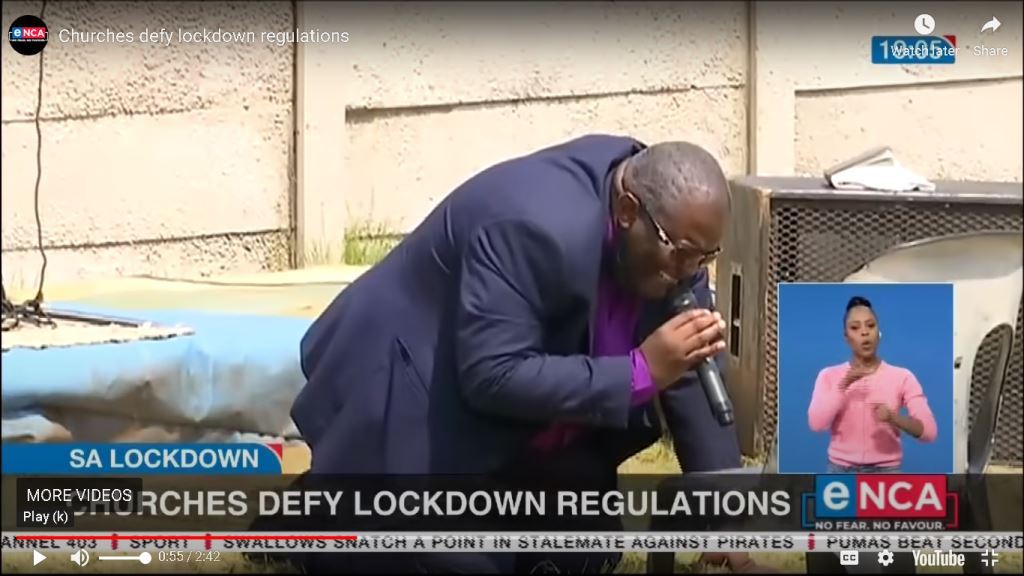 Pastor released without bail, without charges, no fine to pay: could it be the politicians just arranged his arrest to send a message to the public and instill fear to the Church?

With no grounds to charge Pastor John Radebe, it is clear the whole setup was just to get publicity out to send a message to the Church.

And its also amazing how the ENCA news team was there seemingly before the police, and captured all of it. We have asked how did the Mainstream Media get to the scene so quickly? Now we know.

It can only be that Mainstream Media is working with Government on their agenda.

From the meeting its clear people were sitting outside in the open air with masks on. Mostly elderly women, dressed in Sunday service dresses, they were shot at by the police as if they were rioting students. Police came in big numbers to shoot at Pastors praying on their knees. Such utter disrespect for the Church is unheard of.

The whole matter stems from a letter the Pastor had written to Government a few days earlier, letting them know that the lockdowns were made without consulting the Churches and that the Churches were negatively affected by the lockdowns. The leaders pointed out the lockdown of Churches is unconstitutional.

The police then took Pastor John who is the presiding Pastor straight to prison so that he would spend the night there. This is not normal procedure, as usually people who are arrested are taken to the police holding cells. If he was taken to the police holding cells, station bail could have been granted and paid s he is not a violent criminal and poses no flight risk. But because he was severely victimized  by police, he was forced to spend the night in jail.

Churches all over South Africa have shown solidarity with Pastor John and was there to see to his release. The Bible is very clear, that Christians may not neglect the gathering of themselves together. Christians also know that the unity the Church has in corporate worship and prayer is what has kept the spirit of the Antichrist from taking over. The Antichrist wants to set up his One World Government as prophesied in the Book of Revelation. And this is exactly what the Antichrist now is targeting – to stop Churches from gathering, weakening the unity in the Church, so that he can take over with his One World Government.

Pastors, Churches it is time to unite. If you want to see Churches open, please go and vote on the fastest growing Christian Network, on www.Gospel.Network by clicking on the button below:

Click here to vote on the opening of Churches

The video below has some more footage of the actual event. See for yourself if this gathering justified the police brutality that took place.

Very little do Christian-haters know they are playing into the hands of the Antichrist’s One World Government which will give them a One World ID with the vaccine to become part of the One World Economy that will be ruled by the Antichrist through the Mark of the Beast on their right hands and foreheads. The Bible says anyone who takes the mark of the Beast will never ever be able to go to heaven. They will be plunged into wickedness and will be tormented in the lake of fire forever. Revelation 14:9-11. If the Christian haters only knew the Church is the only force stopping the Antichrist from taking over, they would have changed their tune.

We thank God for answering the prayers of the saints for the swift release of Pastor Radebe, like in the book of Acts of the Apostles, the Lord heard the Church’s prayers.

Join www.Gospel.Network, the fastest growing Christian Network in SA stand up against the One World Government plans of forced vaccines.
2021-01-13