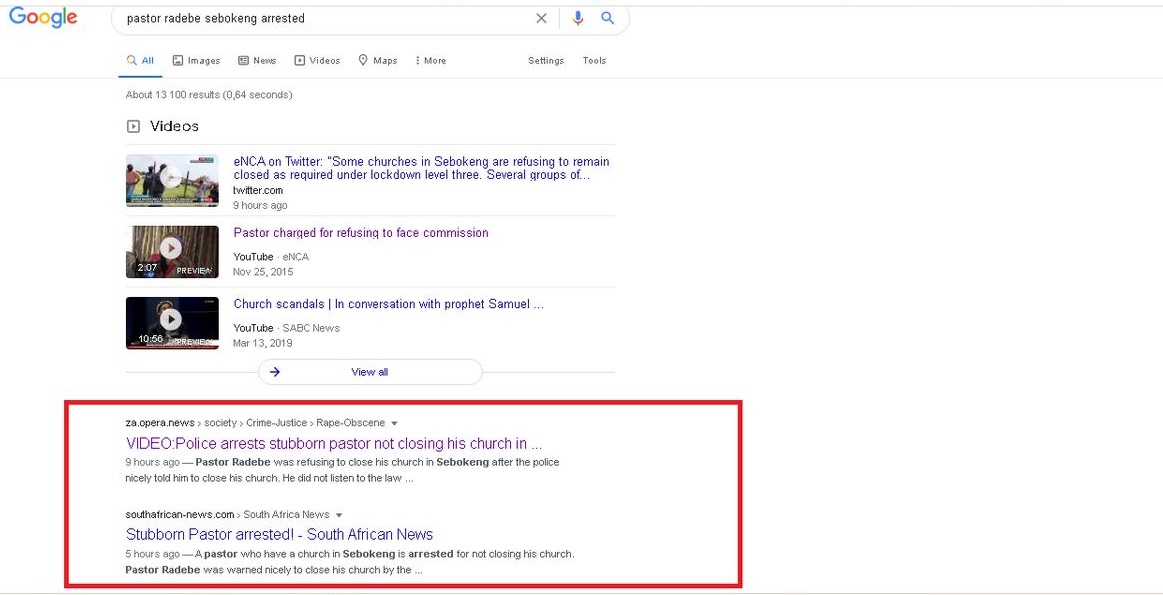 How calling evil, good, by the secular Mainstream Media is affecting the Church

If you want to see how the Mainstream Media has painted the picture of Pastor Radebe’s arrest, have a look at the Opera News article below which ranks #1 on Google.

It paints the Pastor as “Stubborn” and “fighting” police. The police is described as the ones doing things “nicely”.

May God punish the devil.

Either the Church in South Africa is going to stand up against the One World Government puppets in the SA Government and stop the Antichrist from taking over, or we must get ready to be raptured.

Isaiah 5:20 Woe unto them that call evil good, and good evil; that put darkness for light, and light for darkness; that put bitter for sweet, and sweet for bitter!

Here is the article below in RED. See how the Mainstream Media paints a Pastor as wicked. This is all part of the plot to make church goers and Christians villains and to prime the people out there to become haters of Christians.

The police started firing teargas as their way to stop the service and the pastor is still insisting to have his service after a heavy warning made against him. The situation turns not to be good anymore, since the police are being hard on him.

They have arrested Pastor Radebe for defying the word of the law made by the police force members. He is fighting against them even though they are putting him at the back of the van.

It is very disappointing to see the pastor operating against the the law enforcement that he should be working under. South Africa is still under lockdown level 3 and the pastor is not adhering to the measures.

At the moment he is arrested for violating the level 3 measures and as it stands church members are also encouraged not to make the situation harder than already it is.

Why did he force to have a service that lead to his arrest?

The writer of this so-called”news article”was by: komanetk0@gmail.com (via Opera News ). We do’t know the persons credentials as a journalist, but clearly we can see he is not a Christian.

Nevertheless, its good to see comments like that of Kennedy Theo who seems to know the agenda of the Antichrist’s One World Government:

The church is under attack in this country. Other African countries even the United States attends church on Sundays. @CyrilRamaphosa @DrZweliMkhize and Karim are really doing the work of their master @BillGates. Please go read what happened to Paul in the book of acts.

Very little do the Christian-haters know they are playing into the hands of the Antichrist’s One World Government which will give them a One World ID with the vaccine to become part of the One World Economy that will be ruled by the Antichrist through the Mark of the Beast on their right hands and foreheads. The Bible says anyone who takes the mark of the Beast will never ever be able to go to heaven. They will be plunged into wickedness and will be tormented in the lake of fire forever. Revelation 14:9-11. If the Christian haters only knew the Church is the only force stopping the Antichrist from taking over, they would have changed their tune.

Join www.Gospel.Network, the fastest growing Christian Network in SA stand up against the One World Government plans of forced vaccines.
2021-01-10